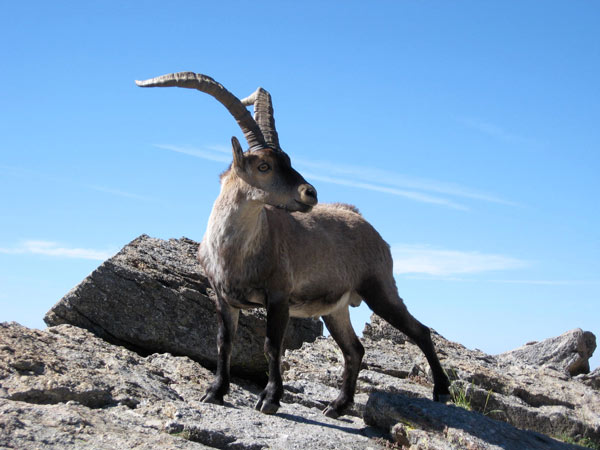 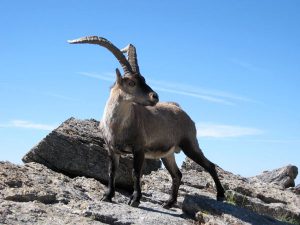 Spain’s Sierra de Gedos is well-known for the diversity and abundance of its fauna. Estimates vary: between 50% and 64% of the Iberian peninsula’s terrestrial vertebrates are found here. These include: 14 species of amphibians, 23 species of reptiles, 130 species of birds, 30 species of mammals, including the peninsula’s largest population of Spanish Ibex— subspecies Capra Pyreneaica Victoriea‑a superbly nimble and majestic animal that has become the nationally recognised symbol of the Sierra, and one that you are almost sure to spot on any walks among the higher elevations in these mountains.

Spanish Ibex are strong animals characterized by their large and ﬂexible hooves and short legs. These physical adaptations allow them to be able to run and leap on bare, rocky, rough, and steep slopes, giving them an advantage over potential predators that possibly cannot reach them because of the terrain. The largest males can reach 120 kg in weight and 1 meter in body height with enormous lyre-shaped horns, while the females are much smaller, with much shorter and straighter horns. Inhabitants of the high mountains, throughout most of the year these animals live in one of two social groups: males-only or females with juveniles, except during the mating season in November and December, when the most powerful males engage in spectacular head-butting contests over the right to mate. As snow covers the higher elevations during the winter, they descend towards the valleys in search of food. The young are typically born in May and live with their mothers for the next several years, until the males mature and move to male-only groups.

The large number of the ibex nowadays in Gredos — estimates range from 5,000 to 8,000 individuals – makes it hard to imagine that just over a century ago the species had almost been hunted to extinction, largely by Spain’s nobles and royalty. Thankfully this was prevented by a pioneering act –in 1905, the main part of the central massif of Gredos was declared a Royal Hunting Reserve by King Alfonso XIII and hunting was banned.

With the parallel extermination in the area of the wolf—the ibex’s only natural predator—the Ibex made a strong comeback and hunting soon resumed on a very limited basis. During most of the Franco era, the reserve was almost exclusively used by the dictator and his guests. In 1972, control of the reserve was passed to the Ministry of Environment (ICONA) and was declared a National Hunting Reserve. In 1987, its status was changed to Regional Park — 2nd highest level of protection after National Park—as part of the network of ‘protected natural areas’ of Castilla y Leon. Limited hunting of the ibex is still allowed as part of a government-run culling program to control the population since no natural predators exist.

For further details, see the Wikipedia article at http://en.wikipedia.org/wiki/Spanish_ibex