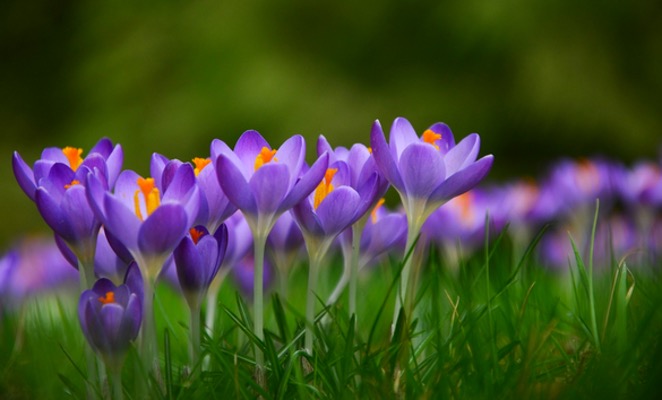 October is the month when one of the world’s most famous and expensive spices is harvested in Spain.

In the pistil of the flower whose Latin name is Crocus Sativus Linnaeus are 3 stigmas of a deep red color. These are what we know as saffron, an undisputed protagonist among the spices used in Mediterranean cooking.

Although its origins are confused, it is believed to have originated in Mesopotamia some 4,000 years ago. Its cultivation was widely known long before Christ in Asia Minor. It was mentioned by Egyptians and used by Cleopatra and pharaohs as an 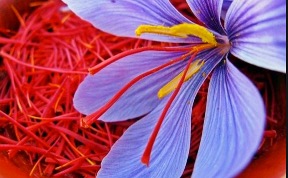 aphrodisiac. The Greeks also used it for its chromatic properties, as a sleep remedy and to attenuate the effect of wines, in their bathing rituals and also as an aphrodisiac. Arabs used it, among others, in medicine due to its anesthetic and antispasmodic qualities; it was they who brought it to Spain in the 10th century.

In India saffron is widely used in Ayurvedic medicine, religious ceremonies and in traditional cuisine. This delicate spice is popular also all throughout the Middle East and Mediterranean countries.

For thousands of years Saffron has been considered one of the most potent natural anxiolytics and sedatives that exist. Its benefits are many. It protects the nervous system and the liver. It aids digestion, reduces stress, insomnia, vomiting and intestinal gas. It stimulates appetite, improves stomach acidity and boosts good humour. It is used for asthma, cough, sore throat, menstrual pain and PMS. It regulates the menstrual cycle and in addition to use as an aphrodisiac, it was also used for infertility. It helps post-exercise recovery. As it is considered to improve memory, it has been used in treatment of Alzheimer’s patients. It helps with dry skin and can be used for inducing sweat, for poor vision, for arteriosclerosis and works well with urinary problems. It is a great antioxidant and delays ageing. All these properties have been validated by scientific studies. Its basic components are flavonoids, vitamin B1 and B2, magnesium and copper. It has also been used as a fragrance and for dyeing cotton, silk or other natural materials.

Genetically speaking, Crocus Sativus Linnaeus is a triploid hybrid, that has been maintained through the centuries due to the 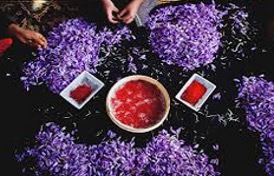 high value of its stigmas.  This extraordinary plant is sterile and therefore is not easy to cultivate because it needs of

human action to reproduce. Sowing it is extremely hard, taking place in June and July, with each bulb having to be planted by hand, one by one. It needs high temperatures and dry conditions in the summer, bare dry soil and good draining to protect the bulb

and cold temperatures in fall.

From the last week in October the flowers start blooming and turning the fields beautifully lilac-purple. This is when harvest time begins, usually lasting until mid-November. Blooming happens at dawn and it is then that specialist farmers rush to pick the saffron.  It is essential that the stigmas stay the shortest time possible in the stem because as soon as the flower blooms, it withers really quickly, and the stigmas lose their color and aroma. Farmers work intensively from early dawn until about 10 am. Once the flowers have been collected one by one, they proceed to separate the stigmas. This task is known in Spanish as “desbrín de la rosa”. Saffron is the most expensive spice in the world due to the complexity of its delicate harvest which has to be done by hand and one stigma at a time.

Saffron is called Azafrán in Spanish, a word coming from Parsi, meaning yellow. The spice is also known as “red gold” because of its exorbitant prices. One hundred and thirty flowers are needed to obtain 1 gram, for 1 kilogram in the market between 100.000 and 300.000 flowers of saffron are needed. The stigmas have a high humidity content and require to be dry and lightly toasted for their conservation. This particular step plays an important role in achieving the right coloring power and aroma. For its best conservation, saffron is kept in big wooden trunks lined inside with a metal sheet. You may now be able to understand the reason why Saffron commands such a high price. 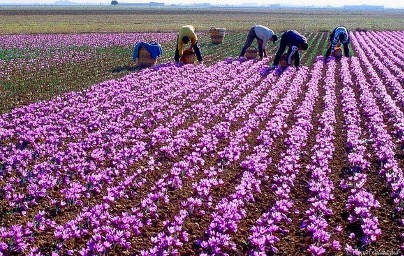 he price of Spanish saffron varies depending on every year´s harvest and the region where it has been collected. The cost in the field is about 3,000€ per kilo, once it has been cleaned and processed it is sold on the market at between 10€ to 20€ per gram. Nevertheless, the most expensive saffron on the market is Sargol, a premium variety cultivated in Iran, the world’s top producer, and can cost up to 15,000€ per kilogram. In Spain, saffron is cultivated mainly in the region of Castilla-La Mancha, but it is in a small county of the nearby Aragonese province of Teruel,

“Comarca del Jiloca”, where the most unique saffron in Spain has been organically cultivated and handcrafted since the Middle Ages.

Today, thanks to scientific studies, we know that saffron stigmata contain carotenoids such as alfa and beta carotene, zeaxanthin and lycopene and many other substances to enhance our health. It has important antidepressant, antioxidant, aphrodisiac, anti-inflammatory and analgesic properties. It is rich in vitamin C and B6 and contains high concentration of magnesium, potassium and iron. It is being sold nowadays as a health and dietary supplement!