When you book with an account, you will be able to track your payment status, track the confirmation and you can also rate the tour after you finished the tour.
Sign Up
12631

This exclusive Iberian Adventures self-guided trip offers 4 days of hiking spectacular coastal trails along the rugged Atlantic seaboard in one of Spain’s most beautiful regions. Our carefully designed itinerary combines the most attractive coastal sections of the famous pilgrims Way – El Camino de Santiago – along the “Camino del Norte”, as well as lesser-known trails – near but not on the Camino itself – that always seek to keep as close to the ocean as possible. It’s glorious hiking terrain, on some of the finest coastal paths in Europe. Scenic paths, beautiful sandy beaches, rocky coves, green pastures and gorse and heather clad clifftops, with plenty of cultural-historic interest along the way. Of course, this region is also known for great cuisine, whether from the sea or the land.

This trip can easily be combined with one of our Camino Primitivo trips starting in Oviedo.

Santander or Oviedo (both are accessed by flights from Madrid, Barcelona and other European cities. Oviedo can also be reached by train from Madrid). Both cities are also a short drive from Bilbao. We can arrange a pickup there if you desire.

Oviedo. Option to link with the start of the Camino Primitivo itineraries OR continue with Part 2: Oviedo to Ribadeo.

(B+ / C+)  Easy to Moderate, depending on whether you take longer or shorter options where offered.

Surfaces range from grassy or earthen paths along cliff-top meadows, some dirt or muddy farm tracks, sandy beaches (depending on tides) and very short sections along quiet paved village roads.

SANTANDER – quality 3* or 4* hotels in a great location on or near the city’s beautiful beach and old town; LLANES – a comfortable hotel in a 17th century convent in the old town; NIEMBRO – a family-run character hotel in a pretty beachside village; RIBADESELLA – an 18th century home in the “Indiano” style, on the waterfront; LASTRES – an early 20th century traditional house with the best restaurant in town

All refurbished historic buildings have en-suite facilities and modern fittings. All properties are personally chosen for their comfort, character, location and overall quality.

You can start on any day of the week, from late March to late October.

Santander – this dynamic port city is the capital of Spain’s autonomous region of Cantabria. The port’s history goes back to the 11th century and the city’s Sardinero beach is wonderful. The star of the old city is the cathedral.

Prehistoric cave art – on Day 2, you’ll have an opportunity to visit 2 fascinating caves, part of a UNESCO World Heritage site with some of the world’s oldest known cave art. These visits are optional and are at a small additional cost.

Santillana del Mar – another optional visit on Day is en-route to your 1st walk. This little historic town is one of the most beautiful in all of Spain  and well-worth a short stop to stroll its winding medieval streets and marvel at the ancient buildings.

Fantastic coastal trails and dramatic scenery – the coastline here is rugged and very beautiful, and features some of the finest coastal paths in Europe, visiting sandy beaches and rocky coves, through green pastures and along gorse and heather clad clifftops. Many sections of run parallel to a nearby range of mountains providing an impressive backdrop to the landscape.

Excellent beaches – we don’t exaggerate when we say that you’ll be passing by – and often walking across, depending on the tide – some of the most beautiful beaches anywhere in Europe! The water is cold, but the beauty of a self-guided trip is that you set your own pace, so if you feel like a swim, the sea isn’t too rough and the weather is good that day, go ahead! Most beaches have shower facilities and during the summer season, lifeguards too.

Asturias – a “principality” within Spain. Although this is the Iberian peninsula’s most mountainous region, our route traverses its lovely coastal fringe of relatively level terrain, mostly meadows dotted with grazing cows, broken up by tiny fishing villages and farmhouse hamlets. Here, traditional lifestyles prevail, and the people are fiercely proud of their Celtic legacy and indomitable spirit – the Christian Reconquest of Iberia from the Moors began here with the 1st major defeat of the Moors at the Battle of Covadonga in 792.

Fewer pilgrims and more authenticity – this route runs through beautiful coastal but very rural landscapes. There are small towns and villages, chapels, churches although relatively few pilgrim’s refuges. Although not mountainous, the terrain is continuously rolling, and relative scarcity of services results in noticeably fewer pilgrims and a sense of authenticity often lacking on the much busier French Way.

Arrival on your own & explore the old town.

Overnight: 3 or 4 star hotel in or near the beach and old town.
Meals: we include no meals on arrival day.

Just after entering Asturias, you’ll be dropped off at a little village church, where you’ll start your first hike, leading the picturesque former whaling town of Llanes. On your way, just inland from a cliff edge, you’ll pass some curious “blow-holes” where the karstic erosion has created a series of tunnels leading from the water up to the surface, so that every time the waves come in, they force a mix of air and water up through the hole, creating a sight and sound much reminiscent of a whale’s spout!

Today’s hike is along lovely clifftop trails linking sandy beaches, seaside villages and rocky coves. A highlight of the day will be one of the most spectacular beaches in all of Spain – Torimbia. A shorter and longer option is available.

Hike: 12.5 – 16 km / 7.8 – 10 mi. A shorter and longer hike option is available.
Overnight: 3 star hotel in Niembro or return to Llanes.
Meals: Breakfast included. Lunch and dinner on your own to explore.

Your trail follows more scenic paths crossing meadows, beautiful beaches and rugged coastline leading to the attractive Asturian port town of Ribadesella. The town’s main claim to fame are its Tito Bustillo caves, widely considered to contain some of the finest Neolithic cave paintings in the world. A guided visit of this UNESCO World Heritage site can be arranged.

Hike: 24.5 km / 15 mi. Shorter options are available by using a short taxi transfer at the start.
Overnight: 3 star hotel on the waterfront in Ribadesella.
Meals: Breakfast included. Lunch and dinner on your own to explore.

The coastal route of the Camino de Santiago wends along more superb coastline, with a succession of golden beaches and pretty towns, ending in the fishing port of Lastres, winner of a coveted award as one of Spain’s most beautiful villages and was the setting of an amusing Spanish TV series called Doctor Mateo, about the lives of a doctor and other inhabitants of a fictional town called San Martín del Sella.

Hike: 27.5 km / 17 mi. Much shorter options are available by using a short taxi transfer at the start.

This trip ends, but in the morning we’ll transfer you to the Oviedo area where you have several options:
– Asturias airport for flights to certain international destinations as well as Madrid and Barcelona
– Oviedo train station where you can take the train to León (on the Camino Francés) and Madrid
– Stay overnight in the city, then your own plans onwards
– Begin Day 1 of Part 2 of the “Best Coastal Trails of the Camino del Norte”, from Oviedo to Ribadeo
– Begin Day 1 of any of our Camino Primitivo trips

Oviedo is the capital of Asturias and declared “cleanest city in Spain”. The city has a beautifully conserved, pedestrian-only old quarter with attractive squares and pleasant safe streets, as well as several UNESCO World Heritage sites, including the Holy Chamber of the Gothic San Salvador cathedral with relics that made it Spain’s second most important pilgrimage site after Santiago de Compostela.

We can arrange a private guided tour in English, taking approx 50 min. This means adding a total of approximately 90 min extra (tour + short detour off-route to the site) to your schedule that day. If you like this idea, we can compensate by starting the hike closer to Llanes to make is shorter.

Day 4 or 5 – Optional visit UNESCO World Heritage cave art in Ribadesella
These caves are the Cuevas de Tito Bustillo, with some of the world’s most spectacular cave art. See more info here.

We can arrange a private guided tour in English, taking approx 60 min. This can be done on arrival at the end of your hike on Day 4 or in the morning of Day 5. 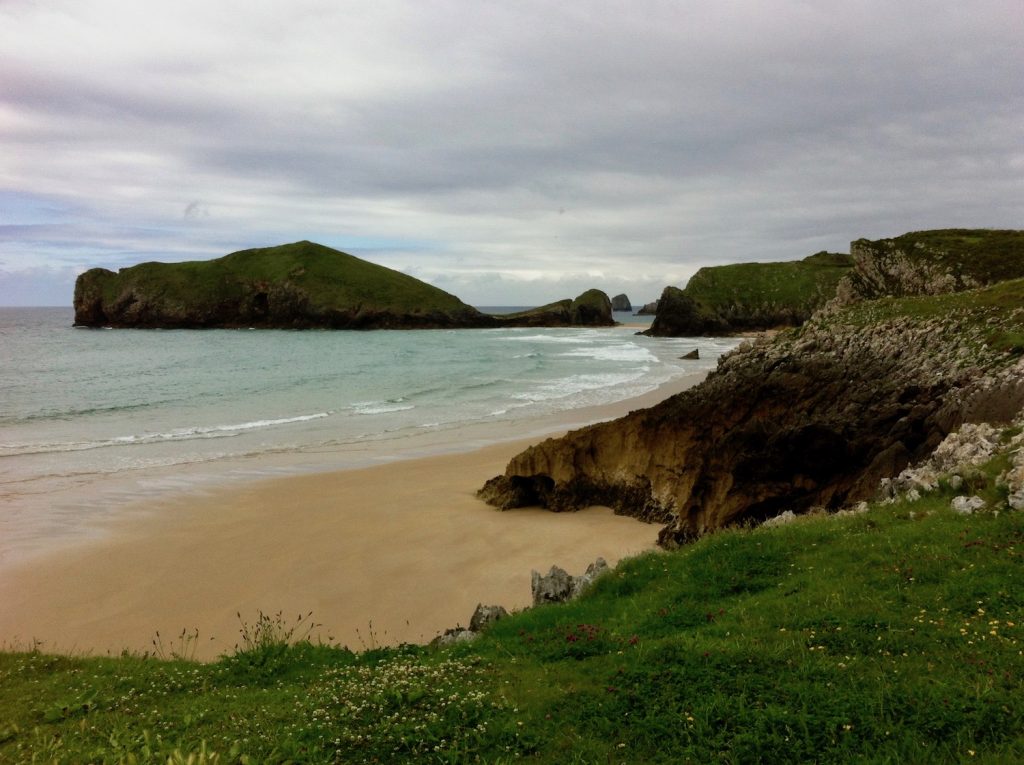