When you book with an account, you will be able to track your payment status, track the confirmation and you can also rate the tour after you finished the tour.
Sign Up
10244

This short trip is perfect as an “add-on” prior to beginning any of our Camino Primitivo trips in Oviedo, or combining with our Oviedo to Ribadeo route of the Camino del Norte to make a 7 or 8 day trip.

Note: if you do this as an “add-on” to a Camino Primitivo trip, you’ll arrive in Oviedo on Day 1 of the standard Primitivo itinerary

Day 3 of this add-on itinerary is Day 1 of a standard Camino Primitivo itinerary.

several daily flights from Madrid, Barcelona and other European cities

Rail service to León and Madrid. Flights to Madrid, Barcelona and some European cities.

Bilbao – quality 3* or 4* hotels in a great location on or near the river, close to the Guggenheim Museum and old town.

Llanes – a comfortable hotel in a refurbished 17th century convent.

All properties are personally chosen for their comfort, character, location and overall quality. Rooms with en-suite facilities and modern fittings

You can start on any weekday

All transfers of luggage and persons, required to complete the itinerary from Bilbao to Oviedo.

Prehistoric cave art – you’ll visit a fascinating cave with some of the world’s oldest known cave art. This visit is optional.

Bilbao – this dynamic port city has become a global model for excellence in urban renewal, and a showcase for some of the world’s best architects, crowned by Frank Gehry’s fantastic Guggenheim Museum building.

Oviedo – capital of Asturias and declared “cleanest city in Spain”. The city has a beautifully conserved, pedestrian-only old quarter with attractive squares and pleasant safe streets, as well as several UNESCO World Heritage sites, including the Holy Chamber of the Gothic San Salvador cathedral with relics that made it Spain’s second most important pilgrimage site after Santiago de Compostela.

Overnight: 4 star hotel near the old town and Guggenheim.
Meals: we include no meals on arrival day, but we’ll provide recommendations for some great eating options!

This morning you’ll leave the Basque Country, transferring westward along the coast to the picturesque former whaling town of Llanes, in the “Principality of Asturias”. A stop en-route in Cantabria to visit a fascinating cave with prehistoric art – a UNESCO World Heritage site. After lunch, explore the historic old quarter of Llanes and begin your first hike on the Camino de Santiago, along lovely clifftop trails linking sandy beaches and rocky coves.

Hike: 9 km / 5.6 mi
Overnight: 4 star hotel in a former 17th century convent in the old quarter of Llanes.
Meals: Breakfast included. Lunch and dinner on your own to explore. We’ll provide recommendations!

A short transfer to the start point of today’s superb hiking route on the coastal route of the Camino de Santiago, more scenic paths crossing meadows, beautiful beaches and rugged coastline. In the afternoon, a transfer to Oviedo.

Optional guided tour of the cathedral and surrounding area available.

NOTE: THIS IS DAY 1 OF ALL OUR STANDARD SELF-GUIDED CAMINO PRIMITIVO ITINERARIES (ARRIVAL DAY IN OVIEDO)

Hike: 11.2 km / 7 mi
Overnight: 4 star hotel in the old quarter of Oviedo.
Meals: Breakfast included. Lunch and dinner on your own to explore. We’ll provide recommendations! 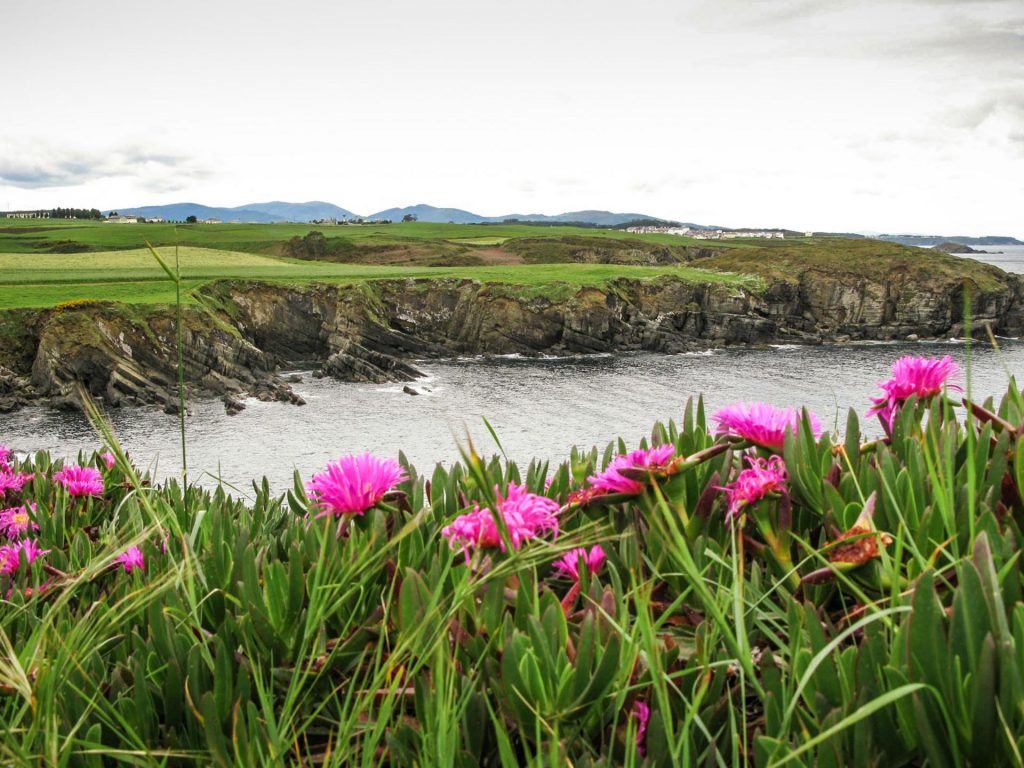