When you book with an account, you will be able to track your payment status, track the confirmation and you can also rate the tour after you finished the tour.
Sign Up
9686

This popular itinerary covers the last 135 km / 83 miles of the Camino Frances, starting the pilgrimage from the town of Triacastela – one of the 1st towns on the Way in Galicia, taking 6 days of walking to reach Santiago de Compostela. This section of the Way includes the “final 100 km of the Camino”, the minimum distance required to qualify for the famous Compostela certificate. What makes our trip so special is that it also allows you to experience some of the completely different culture and environment of Castilla y León and the transition towards Galicia, normally only available to those who start walking much further away!

After a first night in historic León, you’ll transfer in our private taxi, following the Camino to Villafranca del Bierzo for your 2nd night. En-route there will be stops at the main highlights, such as Astorga, Castrillo de los Polvazares, Cruz de Ferro and Ponferrada, as well as options to walk some short but attractive sections of the historic route. On Day 3, a short transfer to up to the mountain-top village of O’Cebreiro for a short visit, then down to Triacastela to start walking all the way to Santiago.

Several daily connections from Madrid and Barcelona by air, rail or bus

C – Although the terrain is very easy, we classify this as “Moderate”, due to length of walks with constant short ups and downs, averaging just over 22 km / 13.8 mi daily. For most people this would be about 5 to 6 hours.

In León and Santiago we use quality 3* or 4* hotels in great locations in the pedestrian-only zones of the old cities. In rural areas, we use the best available, mostly 2* to 3* or equivalent, small family-run hotels and inns. All properties have en-suite bathrooms and are personally chosen for their comfort, character, location and overall quality, with a preference for stylishly restored historic buildings. Good food is also a must!

Any day from March 1 to October 31

Discount for 3 or more

8 breakfasts, 4 dinners with local wine and bottled water. Other nights to explore on your own.

All luggage transfer between Triacastela and Santiago

Private taxi transfers on Days 2 and 3

from 80 euros per person in a single room

Prices include breakfast and taxes

from 160 euros per person in a single room

Prices include breakfast and taxes

150 euros per group (up to 4 persons). Includes transport, hiking notes & map and lunch recommendations in Finisterre town. This is a great morning hike and wonderful way to end your time on the Camino!

You can book this service when reserving & paying for your trip or we can arrange it for you and you pay the guides directly in cash.

With a flexible departure time, the route follows the Camino de Santiago and includes scheduled stops at several sites of interest, as well as allowing you the option to walk up to 3 short but attractive sections of the Camino.

Stops during transfer: Astorga – the city’s illustrious patrimony include numerous Roman ruins, a Gothic cathedral and Catalán architect Antonio Gaudí’s Neo-Gothic Bishop’s Palace; Castrillo de los Povazares is one of Spain’s best preserved medieval villages. Cruz de Ferro is an emblematic iron cross near the highest spot on the entire Camino, with an enormous mound of stones, placed by pilgrims at its base; Ponferrada’s castle is one of Spain’s finest, built by the order of the Knights Templar.

Walks on the Camino en-route to Villafranca: these will be described in your daily route notes.

León – one of Spain’s great historic cities, home to some of Europe’s greatest masterpieces of Gothic art and a wonderful pilgrim’s atmosphere, its old quarter is perfect for strolling and enjoying tapas and the excellent local wine.

Castrillo de los Polvazares – one of Spain’s most beautiful and well-preserved medieval villages, it is the symbol of the area in western León province known as La Maragatería.

Villafranca del Bierzo – considered the “gateway to Galicia”, the last major town before the Way begins the arduous ascent to cross the Leon-Galicia border, it has a wealth of historic buildings, including several churches, a castle, a monastery, a convent and plenty of noble homes.

O’Cebreiro – an emblematic hilltop stone village with curious pre-Roman thatch-roofed dwellings called pallozas. The chapel is the site of one of the Camino’s most famous legends.

Santiago de Compostela  – one of the world’s great historic cities, its ancient granite-clad old town is a UNESCO World Heritage Site. Home to Galicia’s regional government, one of Europe’s oldest universities and the magnificent cathedral that has drawn millions over the centuries like a magnet, it virtually buzzes with a unique energy and is a fascinating place to explore.

Independent arrival in León. Explore on your own.

Overnight: a comfortable 3* hotel in a renovated historical building in the heart of historic quarter, just steps from the great cathedral.

Explore more of León in the morning then transfer to Villafranca del Bierzo by private taxi with scheduled stops at several sites of interest along the Camino, as well as allowing you the option to walk 3 short but attractive sections of the Camino.

Overnight: in Villafranca del Bierzo, in a 3* equivalent historic inn.

Day 3Transfer from Villafranca to Triacastela, via O’Cebreiro . Walk from Triacastela to Sarria

After exploring a little more of Villafranca in the morning, a short transfer to the fascinating hilltop stone village of O’Cebreiro, where you’ll stop for a quick visit. Then continue down to Triacastela, nestled in the heart of a verdant valley, to begin the day’s hike to Sarria.

You’ll have to choose from a shorter and a longer option today, both through lush green countryside, depending on whether or not you want to visit the Benedictine monastery at Samos, one of the oldest in Christendom.

Today’s walk may be the most beautiful of the entire pilgrimage, through verdant forests, grassy meadows, fertile orchards and simple stone-built hamlets to Portomarín, perched on the banks of the Miño, one of Galicia’s great rivers.

The Way continues on through lush Galician countryside to Palas de Rei. If time allows, take a short detour to visit one of Spain’s most outstanding Romanesque churches at nearby Vilar de Donas, classified as a national monument.

Rolling green landscapes, dotted with cows, stonewalls and tiny Romanesque churches on your way to Melide, famed for its Pulpo a la Feira – tender morsels of boiled octopus drenched in virgin olive oil, sea salt and paprika. An especially enchanting stretch of forest trail leads to the tiny hamlet of Castañeda.

Approximate walking distance: 22.8 km / 14.2 mi
Overnight: a highlight of the trip is this 18th century “Pazo”- a traditional granite-built Galican manor near Castañeda.

Quiet lanes and forest paths wend through increasingly populated countryside until you reach the Monte del Gozo—“Mount of Joy”, so named for the emotion of those who were rewarded with their first view of the cathedral spires. Now downhill, in the footsteps of millions before you, until the magical moment of arrival at the impressive cathedral in the Plaza del Obradoiro – Santiago’s grandiose central square.

Walk: 22 km / 13.7 mi
Overnight: located in the old quarter just steps from the magnificent Obradoiro square and the Cathedral, our standard hotel is a comfortable 4 *property in the refurbished wing of a working Franciscan monastery,and is consistently rated one of the city’s best.

Day 9Departure (or stay an extra day or more)

Don’t forget the 12:00 noon mass at the cathedral for pilgrims arriving the previous day! If you’re flying out, most flights out of Santiago leave in mid-afternoon, so you’ll have time for the 20 minute transfer to the Santiago international airport.

NOTE: If you aren’t in a hurry we definitely recommend you stay at least 2 nights in Santiago to fully enjoy and experience this magical city. Then…if there’s time and you want to see more of the area or another part of Spain, consider hiring a car and driving from Santiago along the coast to Bilbao, across the country to Madrid or Barcelona, Andalusia, etc. We can help you to plan your itinerary. Ask us! 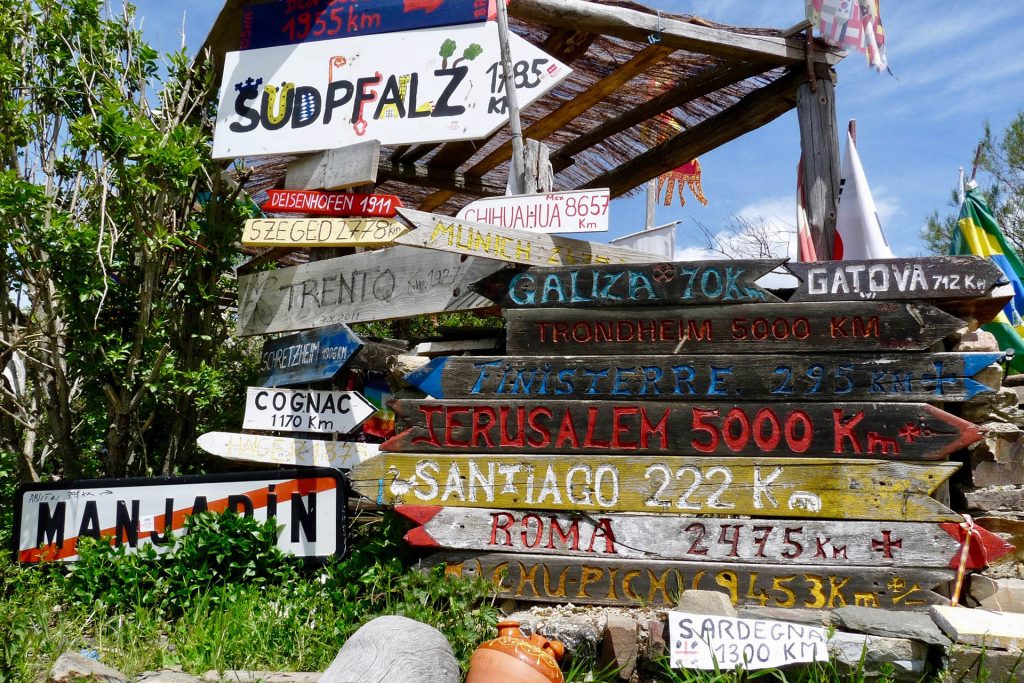